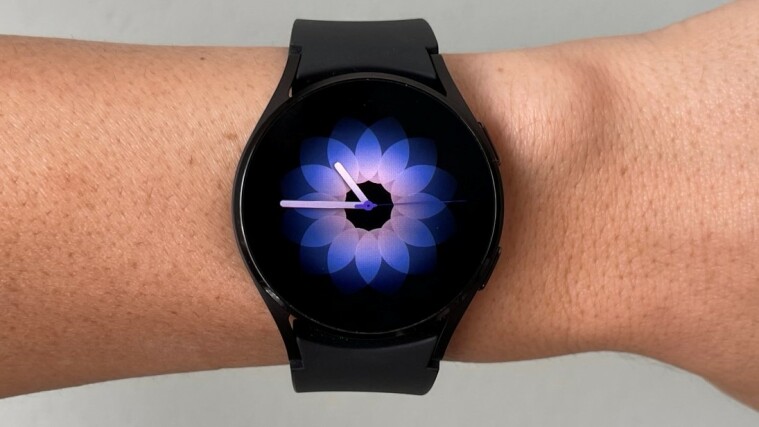 The Samsung Galaxy Watch4 is the best Android-compatible smartwatch for the price, offering the same specs and features as the Classic model for $100 less.

MSRP $249.99
PCMag editors select and review products independently. If you buy through affiliate links, we may earn commissions, which help support our testing. Learn more.

Samsung made significant changes to its smartwatch lineup this year, switching from Tizen to Wear OS, rebranding its Active line, and following Apple's lead by releasing two models to accommodate different budgets. Its efforts have paid off, as the $249.99 Galaxy Watch4 and the $349.99 Watch4 Classic are the best Samsung watches to date. The Galaxy Watch4, reviewed here, is the company's answer to the Apple Watch SE. But unlike the SE, which looks the same as the Series 6 but lacks some its key features, the Watch4 does everything the Classic model can, but is made of aluminum instead of stainless steel and has a digital bezel instead of a physical one. It offers notable upgrades from the Watch3, including a faster processor for smoother scrolling, a higher-resolution display for crisper visuals, expanded memory for music and app storage, a sensor that can measure your body fat, and the ability to track your snoring. Attractively designed, feature-rich, and priced right, the Samsung Galaxy Watch4 is our new Editors' Choice for Android-compatible smartwatches.

Samsung's 2021 smartwatch lineup includes two models, the $350 Galaxy Watch4 Classic and the $250 Watch4. Similar to how the Apple Watch only works with iOS devices, the Galaxy Watch4 series is exclusive to Android. Samsung's latest smartwatches only work with smartphones running Android 6.0 or later with 1.5GB of RAM, a departure from last year's Watch3, which also worked with iPhones.

The Watch4 has a simple, minimal design, similar to its predecessor, the Galaxy Watch Active2. It comes in 40mm or 44mm case sizes, priced at $249.99 or $279.99, respectively for the Bluetooth/Wi-Fi model, or $50 more if you want LTE connectivity. Both sizes come in black or silver; the smaller model is also available in pink gold while the larger one also comes in dark green. For reference, the Classic model comes in 42mm or 46mm sizes in black or silver, starting at $349.99 for the Bluetooth/Wi-Fi model or $399.99 for one with LTE connectivity.

For this review, Samsung sent me the 40mm Bluetooth-only Watch4 in black, as well as a Galaxy Note20 Ultra to pair with the wearable for testing.

Aside from price, design is the only thing separating the Watch4 from the Watch4 Classic. The Classic features a stainless steel case and a physical rotating bezel, while the standard model has an aluminum case and a digital bezel.

The rotating bezel makes the Classic model a bit thicker and gives it a more rugged look. To navigate, you simply turn the bezel to scroll. On the Watch4, you can run your finger along the side of the screen to activate the digital bezel, which otherwise works the same way. The physical bezel is a pleasure to use, but we don't think it's worth the extra $100.

On the Watch4, you can run your finger along the side of the screen to scroll with the digital bezel. (Photo: Angela Moscaritolo)

Both models come with a matching fluoroelastomer (FKM) rubber band. The Classic's Ridge Sport band has a ridge detail, while the Watch4's Sport band is plain. Samsung sells a variety of accessory straps for the Watch4 series, including a $49.99 Hybrid Leather band for a classier look, and a $39.99 Extreme Sport model with air holes for sweaty workouts.

Other than these design differences, the Watch4 and the Watch4 Classic have the same battery, connectivity, internal memory, operating system, processor, sensors, and user interface.

The Watch4 and Watch4 Classic both feature two physical buttons on the right side: a Power/Home button on top, and a Back button below. You also use these buttons when taking a body composition scan (which I'll discuss later in this review).

Samsung says the 40mm Watch4 measures 1.59 by 1.55 by 0.38 inches (HWD) and weighs 0.91 ounces (sans strap), while the 44mm model measures 1.75 by 1.70 by 0.38 inches and weighs 1.07 ounces. But there's a catch: Samsung's depth measurements exclude the health sensor that protrudes slightly off the back, so the watches are actually a touch thicker than stated. Even so, the Watch4 is noticeably thinner than the Classic model. It's also a bit slimmer than the Apple Watch Series 6 and Apple Watch SE, both of which measure 0.42 inches in depth. The Watch4 feels light on my wrist, and its thin case makes it comfortable to wear to bed.

Scrolling is smooth and responsive thanks to the Exynos W920 processor. Samsung says the 5nm chip delivers 20 percent faster CPU performance and 10 times better graphics performance than the Watch3's Exynos 9110. As for memory, it packs 1.5GB of RAM (a 50 percent boost from last year's model) and 16GB of internal storage (up from 8GB).

In terms of durability, the watch has 5ATM and IP68 ratings, meaning it's waterproof to a depth of 164 feet for 10 minutes, and can withstand dust, dirt, and sand. It also meet the MIL-STD-810G military standard, so it shouldn't have any trouble withstanding drops, extreme temperatures, shock, vibration, low pressure, or high altitude.

Like the Apple Watch, battery life is a major limitation here. Samsung says the 40mm model's 247mAh battery and the 44mm's 361mAh cell offer up to around 40 hours of juice on a charge, similar to the Watch3. In my testing, the Watch4 lasted almost 24 hours with the always-on display enabled. In other words, you should expect to charge the watch daily. The Apple Watch Series 6 similarly lasted around 25.5 hours in testing with the always-on display enabled.

If you're in search of a longer-lasting wearable, the Fitbit Versa 3 promises more than six days of battery life on a charge. In testing, it still had 79 percent battery life after 24 hours of heavy use with the always-on display enabled, so you definitely don't need to charge it on a daily basis.

In my review of the Classic model, I go over the setup process and how to navigate the user interface, and the same applies for the Watch4, so I won't reiterate that information here.

As I detailed in my Watch4 Classic review, the new Wear OS platform gives Samsung's latest wearables a much better selection of apps than their Tizen-based predecessors. Google Maps and the Google Play Store come preinstalled, alongside Samsung standbys like Samsung Pay for mobile payments and SmartThings for smart home control. The Google Maps app is a particularly welcome addition to the Watch4 series, bringing turn-by-turn driving, walking, and cycling directions to your wrist.

One notable omission is Google Assistant. I use Google's digital helper to control several smart home devices, including the Wyze Bulb Color and the Nest Thermostat, so having it on the Watch4 series would be super helpful. But right now, Bixby is your only option. Whether that will change in the future remains to be seen, and Samsung declined to comment on the matter.

You can use Bixby to set timers, find your phone, get the weather, and more. (Photo: Angela Moscaritolo)

The new Wear OS platform also doesn't yet appear to offer much integration with Fitbit. Google has promised to bring "the best of Fitbit," which it now owns, to the platform, including health progress tracking and on-wrist goal celebrations, but those features don't seem to be available at the time of this writing. You can, however, still keep track of your daily activity and goals via Samsung Health.

In terms of third-party app support, Wear OS still trails Apple's watchOS, but offers a wider selection than what's available on Tizen. In the Google Play store on the Watch4, you can find some big name apps like AccuWeather, IFTTT, iHeartRadio, Lifesum, Nike Run Club, Kamoot, Pandora, Shazam, and Telegram. Samsung and Google are also promising new and improved versions of Spotify, Calm, Strava, adidas Running, Swim.com, and Flo Period Tracker in the near future. They say YouTube Music and Bitmoji will also be coming to the platform.

Unfortunately, the Galaxy Watch3 and other Tizen-based Galaxy smartwatches will not be eligible for an upgrade to Wear OS. Instead, Samsung has promised to continue providing software updates for its Tizen-based smartwatches for three years from their launch date. So if you want Wear OS on your Galaxy Watch, you'll need one of the new models.

On the health front, the Watch4 series has a new three-in-one BioActive Sensor, which can not only read your heart rate and take an ECG, but also assess your body composition using a process called bioelectric impedance analysis (BIA). Commonly used in smart scales, BIA involves sending a low-level electrical current through your body to measure fat and other metrics. You can't feel this happening, but the small electric current can affect pacemakers and other internal medical devices, so you shouldn't use the watch to measure your body composition if you have one, or if you're pregnant.

After a 15-second scan, the watch displays your skeletal muscle mass, fat mass, body fat percentage, body mass index (BMI, a measure of body size based on your weight and height), body water mass, and basal metabolic rate (BMR, or the minimum necessary energy needed in an inactive state). It also shows whether your results for each metric fall within the low, normal, or high range.

Meanwhile, when you wear it to bed, the Watch4 will automatically track your sleep duration, stages (awake, light, deep, and REM), and calories burned. In the Samsung Health app, you can optionally enable overnight blood oxygen saturation (SpO2) readings. When paired with a compatible smartphone, the watch also lets you keep tabs on a fairly uncommon sleeping metric: snoring.

I detail my experience with the new body composition and snore-tracking features in my review of the Classic model.

For fitness tracking, the Watch4 series supports 95 different workouts (everything from walking and running to archery and flying disc). It can automatically detect certain types of workouts, including walking, running, elliptical usage, rowing, swimming, and dynamic workouts. In testing, the Watch4 series offered accurate fitness metrics compared with the Apple Watch Series 6, and its automatic workout-tracking feature worked perfectly during walks with my dog Bradley.

The Galaxy Watch4 and its more expensive sibling, the Watch4 Classic, are the best Android-compatible smartwatches on the market. Starting at $249.99, the Watch4 delivers more apps than previous Samsung watches thanks to the switch to Wear OS. It can track your snoring in addition to your blood oxygen saturation. And it features a body composition scanner that can help you keep an eye on your body fat percentage. From a design perspective, it features a sleek, slim aluminum case with a functional digital bezel, which are its only differences from the $349.99 Classic model.

Ultimately, we feel the Watch 4 Classic's stainless steel build and rotating physical bezel aren't worth the extra $100. For $249.99, the Galaxy Watch4 offers a premium smartwatch experience at a midrange price, earning it our Editors' Choice award.

Angela is PCMag's smart home and wearable device analyst. She previously spent eight years as a PCMag reporter, and prior to that was a reporter for SC Magazine, covering hackers and computer security. She has also written for several newspapers, including The Northern Valley Suburbanite in New Jersey, The Dominion Post in West Virginia, and the Uniontown-Herald Standard in Pennsylvania. She is a graduate of West Virginia University's Perely Isaac Reed School of Journalism.

Read the latest from Angela Moscaritolo